I thought I would try out the new Blogspot set up by Phil, and post one of my own games for your comments. 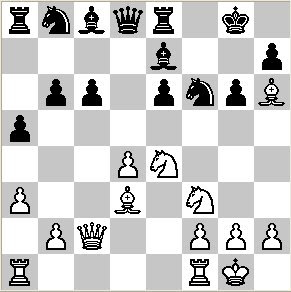 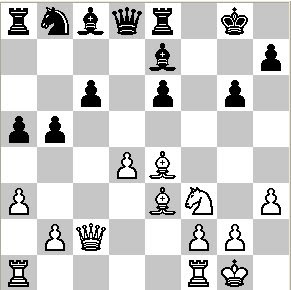 Here I was considering Bxg6 but couldn't be certain it was going to succeed so I played:


SO the point of the posting is to ask, what is the optimal timing of Bxg6?

The March of the g Pawn

East Cheshire A team recorded their first win of the season on Wednesday night! Chorlton outgraded us on paper but wins by David Taylor and I saw us to a 3.5 - 2.5 victory. Whether we can still avoid relegation is another matter.

After 3 games with Black it was nice to be White for a change. My opponent played the opening carelessly and I managed to punish him, ultimately pushing my g pawn all the way to the 8th rank in the middle game!

According to the chess.com games database White wins 65% of the games which have this position so I guess the odds were in my favour.

A useful waiting move, getting my King safe and waiting to see where he will put his pieces.

I think this is wrong as the weakening of the e6 squares proves to be painful for Black.

A sad retreat to the back rank for the Bishop.

This looks too passive. We discussed after the game that 15. ... b4 looked better.

Not giving Black any breathing space. Of course this opens up my King but Black has no time to exploit the open diagonal.

With the threat of Rxf8.

Can you spot how White wins a piece here?

The pawns makes its vital contribution before dying.

White is a piece up and the attack continues.

One of those rare games where you have all the fun and your poor opponent doesn't get out of his own half!
Posted by Phil at 22:55 No comments:

Win by bamboozling your opponent

Here is my win for East Cheshire B vs. Macclesfield Reds.

When the game was adjourned material was equal but I dragged poor Ray over to our place as in the sealed position I could make a passed pawn and he couldn't.

After about another 20 moves we reached the following position:

My rook is tied to the defense of my pawn on a5 but I decided to give it up as I thought my kingside pawns would be more dangerous than his queenside ones.

This is probably wrong but it certainly surprised Ray and sent him into a bit of a spin!

I think White is lost after this. He should stay on the 4th rank to either swipe my b pawn or get behind it. He can then advance his a pawn forcing me to give up the b pawn.

I was just getting into the rhythm of the game's 4th time scramble when he resigned.

An interesting endgame. I think after 4. ... g4 it should have been a draw. It would be interesting to see if it is a Black win after 4. ... Rg3 with the idea of getting 3 connected passed pawns. Anyone with Fritz want to see what it thinks?

Feel free to point out any errors in my analysis!