How to hunt a King

John had a nice win recently in our first team match against Bramhall. Using his favourite Schliemann Defense he sacrificed the exchange to force his opponents King into the centre of the board.

See how it happened:

Last night ECA beat Bramhall 6-0 but this was hardly a fair reflection of the games.

Bramhall are without their two strongest players this season and were not able to field a full team so we started the match at 1-0.

Here is how it developed:

John played his favourite Schliemann Ruy Lopez and Peter was clearly uncertain how to handle it. Peter castled Queenside and was attacked mercilessly, ending up with his King in the centre of the board.

Playing my new English opening I achieved a small advantage from the opening but didn't find a winning plan. However when we reached a Bishop vs Knight ending I decided to play on as a Bishop is normally stronger than a Knight when there are pawns on both sides of the board. I managed to create some pressure and then my opponent, flustered because he thought he was lost, missed a simple draw. 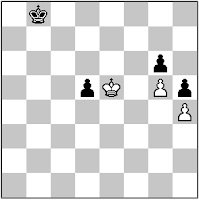 In the above position with Black to move Kc7 gives a simple draw as after Kxd5 Kd7 Black has the opposition and I will not be able to get to his pawns.

However he played d4?? and after Kxd4 Kc7, Ke5 his pawns were toast.

In a Colle System vs. Dutch Keith held his own until the endgame where Dave finally won some pawns and the game.

Keven took on the Sicilian again and didn't seem to get much out of the opening. However, knowing that Hartley is a time trouble addict, Keven kept the position complicated and then launched a winning attack in his opponent's time trouble.

In a Queen's Gambit Declined Geoff forgot to develop his pieces and allowed Dave to build up an imposing position which he duly converted.

So ECA back on track. Next up is Holmes Chapel at home in the Charnley Cup semi final - Feb 9th.
Posted by Phil at 04:20 No comments:

On 5th January the C Team played Ashton Community Chess Club, the first visit by any East Cheshire Team. Ashton CCC is a community resource set up for u18s and before the match we saw a room full of keen students of the game intently watching a lesson /demonstration. This Club may well progress to higher divisions in the League in future years.
The results were
East Cheshire C Ashton CCC
Board
1 Geoff Clarke 0 1 Phil Armstrong
2 Mike Cunnane 0.5 0.5 Tim Chatos
3 Ian Vaughan 1 0 Daniel Bowden
4 Andy Buckley 1 0 Edmund Jones
5 Andy Walker 0 1 Jack Latham
TOTAL 2.5 2.5
Geoff discovered his opponent was graded at 166. Geoff decided to play actively, as he put it to enjoy the game more despite the almost inevitable result.
Ian's game quickly resulted in a centre with tactical possibilities and with the centre pawns gone. A blunder by black enabled a bishop check with a discovered attack on the queen that proved decisive.
Andy W writes:
" I tried really hard not to be put off by the tender age of my opponent .. or his higher ranking (90 to my 75). but unfortunately, my undefeated run so far this season seemed doomed from the outset. Post match analysis revealed that I could have captured his queen on move 12 and then, although being a bishop up from move 16 on and when under pressure, I gave him the positional advantage when in reality I could have played into a winning position. So I resigned on move 20 to avoid the inevitable checkmate. My consolation? He would probably have played badly too if he'd been at work all day ... or maybe not. Bah!"
Mike's game was the last to finish when at 9.15 he accepted a draw. Mike writes: ' I played the black side of a French Defence in which my oponent played an early Nd2, which is the first time I've encountered this. I then played Be7 and later had chances to win a pawn, but did not as it allowed better rook placement for white. The game petered out into a draw.'
The consensus was that Mike may have been slightly behind in an even game, and had made a good call.